I was preparing to speak at a career day a few months ago and was trying to pull together a visual to use to show just how much work goes into getting a book ready for publication. In digging through all the printed drafts I had, I stumbled upon the very first draft for Crystal and Flint. I hadn’t read it in years as I didn’t start saving old electronic versions of the book until like draft 3, so I really thought this version was lost forever. But lo and behold one lone printed copy remained. 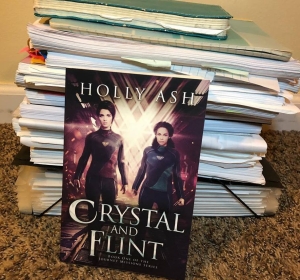 I skimmed through the first chapter and I was amazed at how much it had changed. The main plot points were the same, Crystal gets an urgent message while working on a subfighter, but the set up is completely different. I love to see how a story grows and changes with each draft so I thought it would be fun to take a look at part of the opening scene and see how it compares to what was actually printed.

*Disclaimer* Keep in mind this is the very first draft and I’m going to try not to fix any errors as I type it here so you can see it in all its messy, terribly written, first draft glory.

The young solider felt out of place in every possible way as he walked across the ship yard. His freshly pressed uniform was missing the grease marks and small tears of the soldiers who moved quickly and confidently by him. They made his own confused footsteps seem childish as he wandered around the perimeter of the partly constructed ship hoping someone would notice him. Their mission was to build and crew the most advanced submarine on the planet. They would lead LAWON’s peacekeeping campaign. His mission was to deliver a letter, a letter he was not authorized to know the content of. All he was allowed to know was the name of the officer he had to deliver it to, Lieutenant Commander Wolf. He did have one thing in common with the men and women working on the ship, they were all hand chosen for their current mission: them because they were the very best of their field and him for his proximity to the General the moment the message he now carried needed to be delivered.

The ship itself was massive. She was at least 300 yards from tip to tip and anther 50 yards wide. The partially exposed skeletal frame showed the five inner levels of the ship. Large sections of the haul were covered with a smooth smoky-grey metal. He knew, from the LAWON new bulletins he’d read, that as impressively as the metal shown in the sun this was not the finished appearance of Journey. Using concepts of solar energy and Aquinien anatomy Captain Reed and Commander Wolf had designed a skin like covering for Journey that would allow the ship to pull its energy from the water and light it traveled through.

As the solider moved through the chaotic build site, he was starting to become worried that he wouldn’t be able to find who he was looking for. Everyone around him was too busy to notice him and he didn’t want to interrupt their work. After a great deal of searching, he finally found someone whose attention he felt he could get.

“Excuse me,” the young solider said. The name plate of the person who turned around read Chief M. Stiner. She gave the solider a stern look when she first turned around the solider was afraid he had interrupted something important. As soon as Monica Stiner realized that is was not a member of her team that had interrupted her, the stern look on her face warmed to a smile.

“Can I help you with something?”

“I’m looking for Lieutenant Commander Wolf. I have a message from General Craft.”

“Working on the subfighter over there.” Stiner pointed the solider in the right direction then returned to her work.

The solider found wolf lying under one of the subfighters apparently working on the sub’s wiring. He stood near the officer’s feet and said with a hint of a tremble in his voice “Lieutenant Commander Wolf.”

Wolf emerged from beneath the subfighter she was working on. Her rock solid body was apparent through the white tank top that was clinging to her with a mixture of sweat and motor oil. Her shoulder length brown hair was slicked to her head in places with a thick blue goo that the solider couldn’t identify. “Is there something I can help you with?” Wolf grabbed the black button down shirt that made up the rest of her uniform off the back of the subfighter and started to put it on.

“That’s what is says on my nametag.”

“Spit it out solider. I haven’t got all day.”

“A…a… orders from General Craft,” said the solider suddenly remembering the small computer clutched in his hand. Wolf took the computer from his trembling hand, taking a moment to give him an amused smile. She lifted the computer to her mouth and clearly spoke her full name and rank into the voice identification speaker below the screen. The moment the last syllable of her name left her lips the blank screen came to life. The message that appeared was short and vague; Report to LAWON headquarters at 12:00. She glanced at her watched; it was already 11:15.

“When was this message given to you?”

“You sure took your time delivering it.” Wolf could see the fear in the solider’s eyes as he stood paralyzed in front of her.  “Please inform General Craft that I have received his message and will act accordingly, and this is a time sensitive matter so do it quickly.”

“Aren’t you forgetting something?” He turned around and took the small computer from Wolf’s out stretched hand. He glanced down at it hopeful that he might get a hint as to the subject of this time sensitive matter, but the screen had already been wiped clean. “Now go.”

Are you still with me? Good. Believe me, I know that was rough and you are a champion for getting through it. But I do think there are a few things to be learned from it, aside from the poor writing and errors.

I know as writers we only want to share our absolute best writing but I think there is a lot to be learned from looking at old “bad” writing and trying to understand what mistakes you’ve made. How else can you ever learn to get better? If you want to see how I addressed these issues and changed this opening scene of Crystal and Flint you can read it here.

Other posts you should check out

When things don’t go according to plan

A day in the life of me

View all posts by hollyashwriter

2 thoughts on “How a Story Changes: A Look Back at the First Draft of Crystal and Flint”

As an Amazon Associate I earn from qualifying purchases.